As you probably know one of my mane weapons for my RokON freestyle shows is the 690 Duke that I am riding now for past 3 years … And now KTM made a new updated version with more power and other improvements that could make my style better and also shure your riding on the streets more confortable. I invite you to read trough my blog with epic pictures from one of my favorite photographers Sebas Romero and technical information from KTM Blog 😉

Twenty years on and the 690 DUKE is still being re-sculpted to deliver those virtues that KTM constantly strive for: performance, agility and fun. Apparently over 50,000 690 DUKEs have emerged from factory floors since the first appearance of the LC4 in a Street bike frame and the fifth generation of the bike was unveiled at EICMA in Milan few weeks ago.

1. Power play
First up, it’s all in the ‘73-74’: 73 horsepower (75 on the ‘R’ version) and 74Nm of torque from the revised LC4 single. An extra 1000rpm on the band for even wider spread and another balancer shaft on the cylinder head means less vibration. The engine is the real meat of this particular meal and although the electronics and ride-by-wire were already installed on the 690 DUKE three years ago the output of the DUKE is now on another level.

Happy bums
The last version of the 690 DUKE featured a central and ‘submerged’ position that allowed you to throw around and explore the agility of the bike with ease. It wasn’t the most comfortable for long outings though, especially for taller riders. The 2016 690 DUKE has a narrower profile saddle that makes sliding back and easing into more of a relaxed ‘touring’ position far more simple. In fact it is one of the more noticeable elements through spending an extended amount of time on the bike, so full credit for KTM and KISKA for working diligently on this aspect. There are a number of other small details. An honourable mention for the TFT (thin film transistor) display that is seriously future-thinking from KTM and couldn’t be easier to read; loved the way the ‘tablet style’ screen also automatically switched brightness going through a tunnel and it must be equally as effective riding at night. Styling? The graphics don’t alter the KTM flavor too much and this is unmistakably a prominent member of the DUKE family but things like the four kilo aluminium ‘lattice’ swingarm is almost a work of art.

If you want to read more detaild write up about the new Duke 690 head over to the KTM BLOG – RokON! 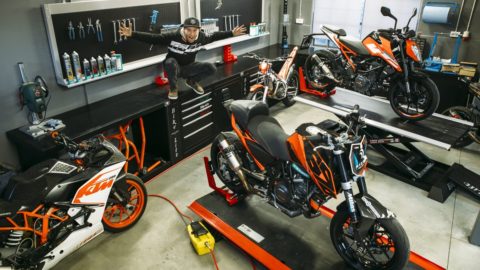 How to build a stunt bike – KTM Duke version